Select a frame
No
about the painting about the artist payment and delivery about delivery
Technique
Oil, Canvas
Genre
Fine and Contemporary Art
Keywords
Women flowers for bedroom For living room as a gift Fine art Large on canvas Oil 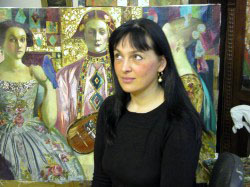 About the artist
Born in Saint-Petersburg in 1966 into a family of talented and respected artists. Olga is the representative of the dynasty of Suvorov artists, which includes the three generations of St Petersburg artists: Igor Suvorov, Natalia, and Olga’s daughter - Ekaterina. Olga Suvorova's father, Igor Suvorov, was the Honored Artist of the RSFSR.

In 1998 Olga Suvorova graduated from Saint-Petersburg Academy of Arts named after Ilya Repin. She studied painting techniques and monumental composition at the studio of the famous artist Andrei Mylnikov (1919–2012).

Although Olga Suvorova had influential parents and teachers, it never stopped the artist from developing her original style – historical costume portraits of personages in the style of various periods, such as the Renaissance, Baroque and Rococo. Her work is reminiscent of the popular in the 20th century Saint Petersburg artistic movement ‘Mir Iskusstva’ (‘The World of Arts’) which was inspired with the art and culture of the 18th century.

The artist constantly participates in exhibitions in Russia and abroad. Her works are found in private collections in England, America, Germany, China, Russia and other countries.

1990 - an exhibition at the Saint-Petersburg Academy of Arts named after Ilya Repin.

1992-2013 – the annual spring and autumn exhibitions at the Artist’s Union in Saint Petersburg.

1994 – an exhibition at The Alberti Gallery in London.

2003-2013 - Annual Fair Holland Group Exhibitions, the Netherlands.
2005 - participated in the exhibition of The Royal Society of Portrait Painters, London.