Select a frame
No
about the painting about the artist payment and delivery about delivery
Technique
Oil, Canvas
Genre
Landscape
Keywords
on canvas Oil 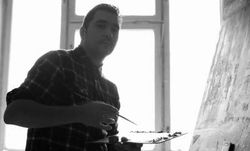 About the artist
Born in Moscow in 1980.
In 2002 graduated from the Moscow Pedagogical University.
Since 2003 member of the Creative Artists' Union of Russia.
In 2010 joined the Creative Union of Artists ‘Rodniki.’

Vladimir Kirillov was awarded medals of the Creative Artists' Union of Russia, and received a diploma for active participation in events dedicated to 200th year anniversary of A.S. Pushkin from the Mayor, Moscow Government and the magazine ‘My Moscow.’

1997 - Exhibition "300 years of Peter the Great's visit to Holland". The exhibition was organised by the Moscow Culture Foundation and the Dutch Embassy

2010-2011 - Exhibition dedicated to the 150th anniversary of the artist I.I. Levitan "Traditions of Russian Landscape" at the Central House of Artists, Moscow

Kostroma. Church Of The Virgin